The Feminine Side of Beer [Joint interview]

On the occasion that it’s International Women’s Day on Wednesday, 8th of March, BelgiBeer went to meet Virginie Harzé, a 37-year-old production manager at the Val-Dieu Abbey Brewery, and Rosa Merckx, 92 years old and first female “master brewer” at Liefmans. They both agreed to tell us about their passion for beer and their daily life in a sector still largely dominated by men.

Hello, ladies! Being a woman and working in a brewery is not very common, especially in your case because it is not a family inheritance. How did you enter the brewing world? 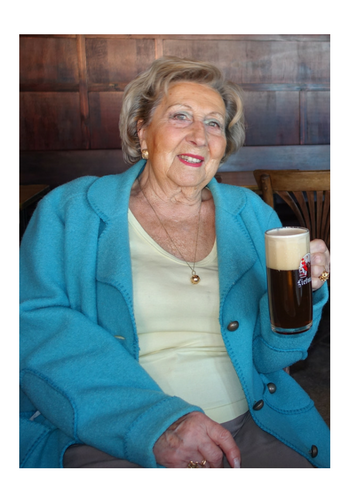 Rosa Merckx: By accident! This was in the 1940s, I was a young girl from a good family. At that time, women usually stayed at home until they found a husband. But I have always been very active. I was taking classes in English and drama, I took on classical dancing, I was a volunteer at the Red Cross, and I even played basketball! I kept myself busy and amused. One day, the owner of the Liefmans brewery in Oudenaarde (Editor's note: Paul Van Gheluwe) came to my house. He was looking for a trilingual secretary –French, Dutch, English –, which was rare at the time, and he heard about me. He offered me the job. It was a thousand leagues from anything I had imagined! I was hesitant at first, but the owner was a charming and noble man. He suggested that I join him for a month and then later make the decision. In the end, I ended up staying for 46 years and evolved into a master-brewer. 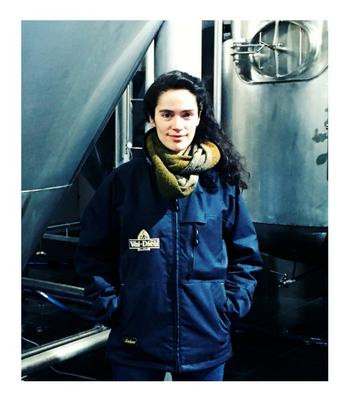 Virginie Harzé: I enter the brewing world a bit by chance, I must say. During my studies in agronomy at L’Insitut de La Reid, near Liege, I had to do a three-month internship. I wanted to work in the agri-food and craft industry, if possible. I was very interested in chocolate, but I thought, “It’s probably not a good idea because I will not stop eating it!” Then I turned to beer. I did not know anything about it at the time and, to be honest, I had hardly ever tried it! But as it was a very popular product, with a great reputation not only in our country but also abroad, I thought it would be really nice to learn more about beer and the brewing sector.

The fact that it was predominantly a male environment did not frighten you?

V.H.: Not really, I was always attracted to the more masculine trades. I remember that I wanted to be a fireman, then a forest ranger, a veterinarian, and even a garage mechanic. So no, it was quite motivating!

R.M: The most frightening aspect was the fact that I did not know anything about beer. I never had any nor had I studied for any of this either. However, I welcomed the challenge.

R.M: After approximately 6 months, the boss asked me to help him out in the laboratory. I was a quick learner, it seems. The brewery has a very different environment compared to other industries. It’s very lively, creative. At the time, Liefmans was a medium-sized brewery; craft beer was made there. I began to discover what malts were, hops, the different dosages… Creating a beer is like cooking a good soup, and I found it very interesting. I did not have any training as an engineer or a chemist, but I had a very good sense of smell and taste., which is essential when making a good beer. After the war, for example, I created the Liefmans Goudenband, a fairly sweet red-brown beer. I noticed that men were not the only ones in cafes – there were also young people and women. It was also a popular time for Coca-Cola; and it was also a time that required a beer that could satisfy all palates.

V.H: For my part, I did my three-month internship in a company specializing in brewing equipment. This first experience gave me a taste for beer, its manufacturing, but also for its tasting. With my diploma in my pocket, I wanted to work in a brewery. I sent out several applications, but it never lead me to anything. So I started my first job in Brussels, which wasn’t really something I was into, but I also continued searching. At one point I saw an ad for a big brewery in Charleroi (Editor’s note: Brasserie Alken – Maes). They were looking for someone for the lab, in quality control. I got the job and stayed there for two years.

Why did you leave?

V.H: After two years, I felt like I had enough and was ready to get my hands dirty, which was not possible at Alken – Maes. I also wanted to return to the region of Liege, where I am from. It was at this point that I decided to send an application to Val-Dieu.

Did you think that being a woman could stop you from being a brewer?

V.H: My motivation letter stayed on my desk for a week… I thought, I would send it, they would die from laughter and they would say, “A girl, what will she even do here, she won’t have the strength to pull the weight on her shoulders, it won’t work (laughter)!” Then I got the courage to send the letter and they eventually got back to me. A beautiful story that already lasts for 12 years.

R.M: I didn’t even ask myself that question. At the time, Paul (Editor's note: Van Gheluwe, the owner of the brewery) was the only brewer and he decided to pass his knowledge on to me. When he was travelling or on vacation, he let me handle the brewing.

How were you welcomed by your male colleagues?

V.H: Very well! When I arrived at Val-Dieu 12 years ago, we were only four: the two bosses, another employee, and me. It was necessary to be in the field – I learned how to fill the bottles, the casks too… We did everything, all together. Under these conditions, it isn’t very difficult to integrate. I think the mentality changed quite a bit as well. If it was 60 years ago, then I might have had more trouble, but today is different. I actually think that my male colleagues are happy to have a girl on their team!

What do you think, Rosa?

R.M: In 1972, when Paul (Editor's note: Van Gheluwe, the owner of the brewery) passed away, his family asked me to take over while waiting for somebody else to take his position. That was when I took the lead of about forty men. We had to manage everything: taste, quality, orders, but also the team… This lasted for 2 years, and I can tell you that my male colleagues were always charming and always considered me as one of their own. Subsequently, despite various acquisitions, whether it was by Nicholson – a rich English family with close ties to Queen Elizabeth II, or by the Duvel Moortgat group – everything went well. Today, I am 92 years old and every day I still visit the brewery. I do not care about my age and the employees always give me a warm welcome! 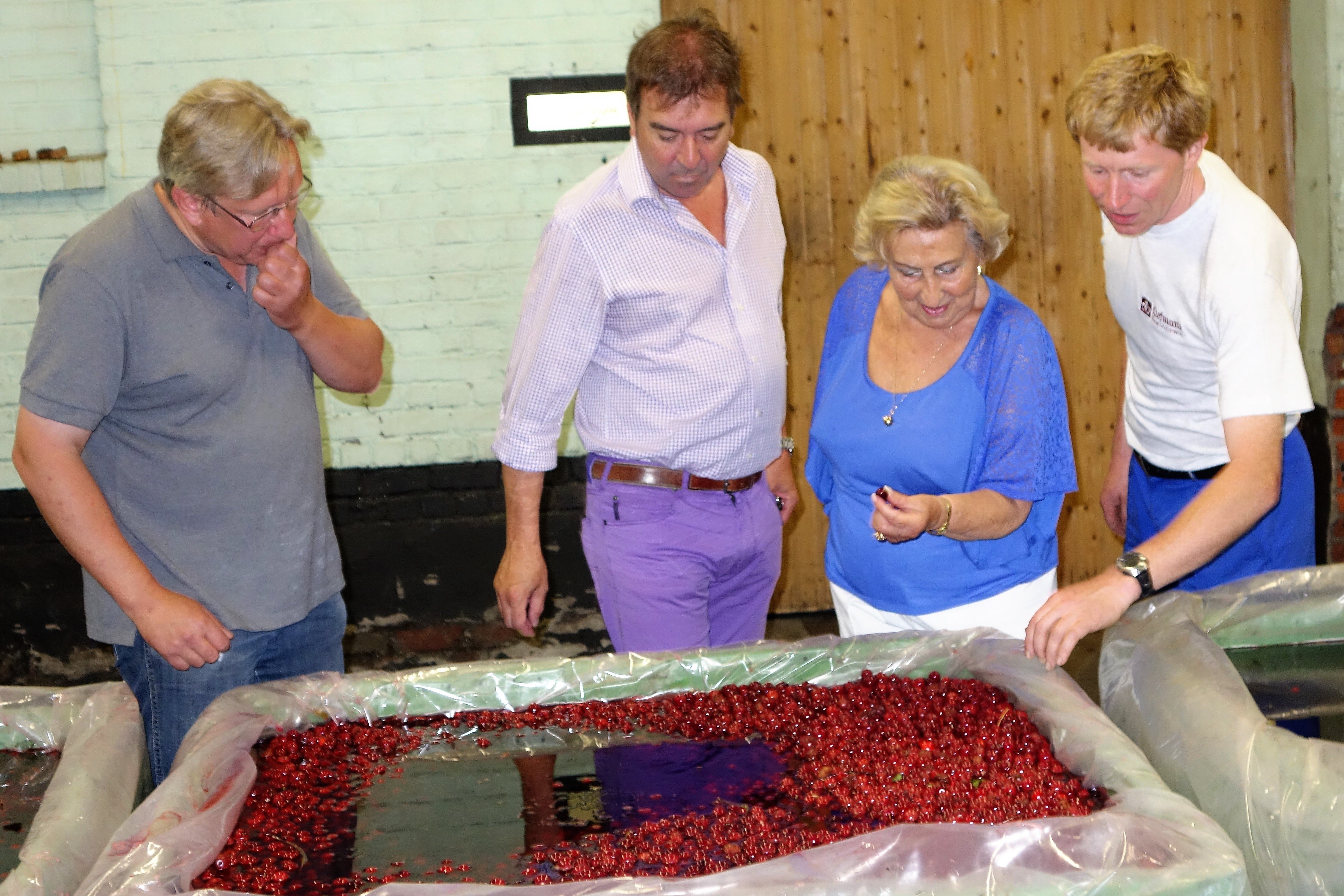 According to you, do you think women possess qualities in this area that men simply do not?

R.M: It’s hard to say. Perhaps from the aesthetic side of the product that has to do with marketing, advertising…

V.H: I do not know if it is really the fact of being a woman or a man, but I helped with the development of a new beer, lighter in alcohol but also more bitter: the Cuvée 800. 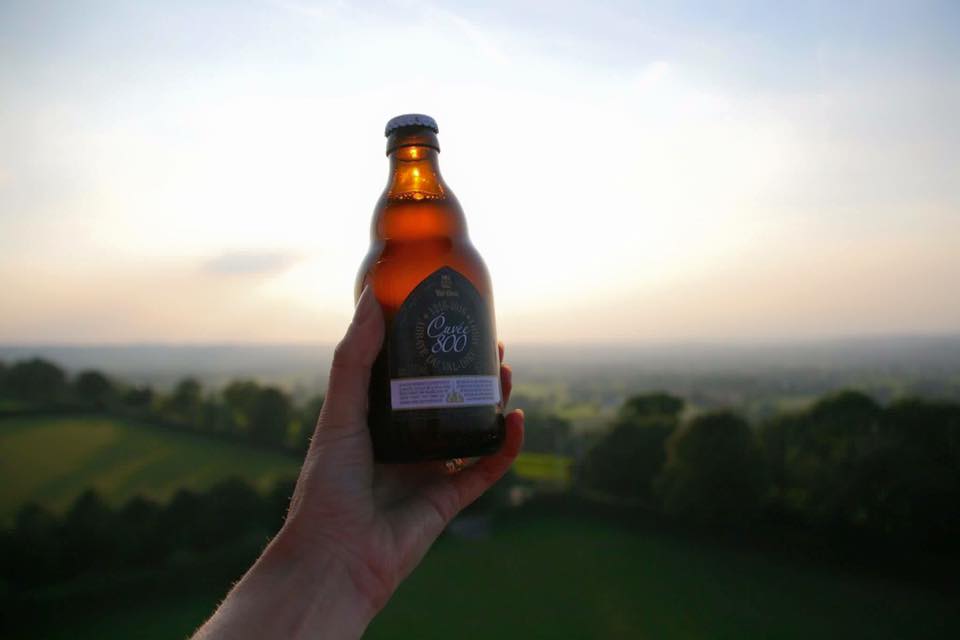 We tend to believe that women prefer light and sweet beverages, but I do not share that belief. We appreciate a “triple” beer or a grand cru.
From a quality point of view, I may be a little bit more perfectionist that my colleagues (laughs).

For millennia, beer has been venerated, produced and consumed by women. This has changed, but it seems that the beer market is about to receive a more feminine touch. What do you think?

V.H: I’m not a historian, but it is true that beer was part of the era when women stayed at home, therefore it was mostly women who brewed it. From the time of industrialization, men began to produce. No doubt that religion also had its impact… In some abbeys, it is said that women were brewing. Fortunately, things have changed! At the same time, the brewing culture is experiencing a tremendous enthusiasm, many microbreweries are reopening, the association of beer and food is also becoming more developed. This all means that more and more women are interested in beer, and we see more and more of them in breweries.

R.M: Times have changed, that’s true. With the evolution of customs, women have gained freedom and power. They began drinking beer and enjoying it. Today, they do not just consume light or fruity beers, but any type of beer. This is great for breweries – there is still so much to create.

Express delivery wherever you are

Are you in the hurry to get your box ?
Choose the express delivery and your box will be shipped the next day

Flexible subscription, can cancel at anytime

We use high-performance technology: a secure server (SSL) that ensures the reliability of our online business. This software encrypts all your personal data required to process your orders (name, address, bank details) at the time of their entry. During their only transfer via the Internet, it is impossible to read them.

The only information circulating on our website during your orders is a random number associated with your card, which no algorithmic calculation can find from the real number of the card.

BelgiBeer uses Stripe technology for online payment. Stripe is the leader in payment technology, and is today the unavoidable partner of the merchants in their international deployment. Their integrated solution for mobile, online and point-of-sale payments allows us to accept virtually any payment method anywhere in the world.

We accept on Belgibeer.com the following cards: Visa, Mastercard.

Quick replies to all your questions from our Belgibeer experts

If you need advice about a product or additional information about your order, please do not hesitate to contact our customer service. Barry and his team answer you in less than 24 hours!
However, before you email us, we advise you to take a look at our FAQ, it is very likely that the answer to your question is there.

Insurance against breakages in the event of an accident

Don't worry we have less than 0.1% of damage.
In case of breakage, you'll get a refund !